Sunday’s NFC Championship might come down to Arizona’s pass protection vs. Carolina’s pass rush. The Cardinals allowed the 2nd most QB pressures over the last month of the season. The Panthers, meanwhile, finished the year 7th in pressures and 5th in sacks. They’ve averaged just 1.9 sacks per game over their last 7 though, and just lost DE Jared Allen.

If the Cardinals’ pass protection holds up, their excellent wide receiver trio should exploit a Panthers secondary that’s beatable beyond CB Josh Norman. David Johnson has a tough task on the ground against a Panthers defense that’s allowed just 4.1 yards per carry to running backs over its last 5 games. But he presents just as big a threat in the passing game, where Carolina finished the regular season 31st in catches and 26th in receiving yards allowed to RBs. Johnson has averaged 3.8 catches in 6 games as Arizona’s lead back.

Larry Fitzgerald willed the Cardinals to a victory last week, racking up 8 catches for 176 yards and a score. He’s now averaged 114 yards and 1.25 TDs in 8 career postseason games. Running about 60% of his routes from the slot, Fitzgerald will avoid shutdown CB Josh Norman for the majority of the NFC Championship. Michael Floyd scored twice last week but caught just 3 balls and finished 4th on his team with 7 targets. He moves around the formation enough that he shouldn’t see Panthers CB Josh Norman for more than half of Sunday’s game.

But look for slot maven Larry Fitzgerald to serve as Arizona’s top target in this game. John Brown has seen a team-high 20 targets over the last 2 games, parlaying them into 9 catches for 127 yards. He figures to stay away from Panthers CB Josh Norman for at least half of tonight’s NFC Championship.

Cam Newton has gone 5 straight games without tossing an INT, totaling 11 passing scores over that span. Avoiding turnovers will be key against a Cardinals defense that finished 4th with 19 regular-season INTs. Don’t be surprised if Newton has a big rushing day. Arizona allowed 3 QBs (Colin Kaepernick, Mike Vick and Russell Wilson) to top 45 yards on the ground this year.

Only 7 teams allowed fewer points to RBs than the Cardinals this season. But 1 of those teams was the Seahawks, who Stewart just ripped for 106 yards and 2 scores on 19 totes. That’s the most rush yards Seattle allowed to a RB since Week 11 of 2014. The fact that Stewart has carried 19+ times in 9 straight healthy games gives him a comfy floor.

Greg Olsen accounts for 38% of Cam Newton’s completions, 48% of his yards and his only TD in last weekend’s win. The TE figures to play a huge role again this Sunday against a Cardinals defense that shuts down opposing WRs. They were mediocre against TEs, ranking 25th in catches allowed and 20th in yards.

America’s Bookie has the Panthers a 3-point home favorite with the number at 47½ for this NFC Championship game. Go to A1 Service Plays for free service plays and picks from professional handicappers. 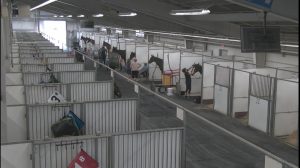